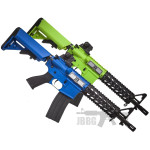 This is the G&G ARMAMENT COMBAT MACHINE CM16 RAIDER-S, an outstanding airsoft BB gun that is now available in both bright blue or green at JBBG…Battery and charger is not included.

This outstanding airsoft gun from G&G is constructed externally from Polymer, with a Polymer Receiver, Rail and Grip, and with an Alloy Outer Barrel, Sling Plate and Stock Tube. The tactical gun features a Four Point 20mm RIS / RAS Handguard, which can be used to attach a variety of Grips, Torches and Lasers, allowing for lots of aftermarket customisation options. The top of the Receiver also features a 20mm RIS / RAS Rail, and when combined with the Hand Guard provides a full-length Top Rail, allowing the attachment of large Sights and Scopes. The gun also features Iron Sights, with a Fixed Front Post Iron Sight, and Removable Rear Iron Sight. The Rear Iron Sight is removable via the side Hand Screw, which allows the quick removal without the use of tools. The rear of the gun features a Sling Plate to allow the use of Slings and Harnesses, as well as a Six Point Adjustable Crane Stock which allows the gun to be adjusted to the size of the user. The Crane Stock also doubles up as a battery storage area, allowing the batteries to be connected to a Wire coming through the Buffer Tube which connects to the Rear Wired Gearbox. The front of the gun features a Bird Cage Flash Hider, which is removable to reveal a 14mm Counter Clockwise (CCW) threaded Outer Barrel, which allows for the attachment of various Suppressors and Tracer Units.