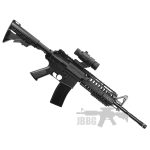 D96 AIRSOFT BB GUN
This WELL BB Gun Set is a replica of the tactical M4 assault rifle. This gun is not suitable for skirmishes but it dose provide a good platform to get used to the feel of an M4A1 Assault rifle. For example, if you are someone who has never played airsoft before it might well be a good idea to get used to the feel of this gun before moving onto a more expensive model for skirmishes. On this particular type of gun, the magazine is actually the battery, and the BB’s load into the Hopper through the fake sight – this allows for new players to not have to worry about learning how to use a High-Cap or Mid-Cap magazine. As this is modelled off of an M4-SS there is plenty of room for attaching things to give you that competitive advantage over your friends in battle, there is room for a torch or laser on the side of the handguard, and the pre-included verti-grip is a fantastic piece of kit. Built out of solid ABS this weapon will not let you down when used in a battle against your friends, the construction is fantastic for the price and the weapon holds up well to general wear and tear experienced in normal use. By having the “paintball” style hopper this allows for reloading while still shooting, allowing you to effectively have unlimited ammo until the battery runs out. This gun will have your friends ducking for cover when used in a garden style environment.